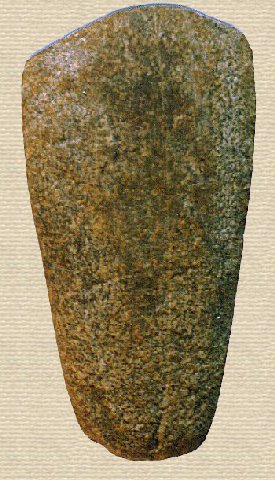 After roaming through nature for thousands of years, man had acquired a wealth of knowledge. Then, a new step forward was taken by man in the Middle East about 12,000 years ago: man became a farmer. It was not necessary for him anymore to hunt and follow wild animals and he settled near his fields, his crops and his livestock. This new life-style entailed new inventions like: ceramics, agricultural implements, weaving, the wheel...

The museum covers the epoch during which man realizes a revolutionary breakthrough, namely the introduction of agriculture. This period is called the Neolithic, a timespan in which stone is still being used as raw material for the manufacture of implements. You can see polished axes, winged arrow-heads, spears, the earliest pottery, and agricultural tools like the sickle and a grinding stone.

Our eyes are pointed at early life, always changing, growing. And again we follow a trace which finally leads us to early man, who has to cope with his changing and hostile environment with limited means. His most important asset is his intellect. And while the animals around him have to bow to the vast climatic changes, man adapts himself.

When the severe ice ages finally came to an end, man hunted small game. Everything that he needed, he took from nature: plants, wood and bone, stone for implements and for weapons, and skins to make clothes.

We have a review of the hunters who roamed through this region after the last ice age. This period was called the Mesolithic. The climate changed and migration of wildlive and plants followed. That these people lived on a varied diet can be deduced from the variety of tools that have been recovered. Fishing was done by means of traps, eel-spears and hooks. Spear, bow and arrow were used to hunt water-fowl.